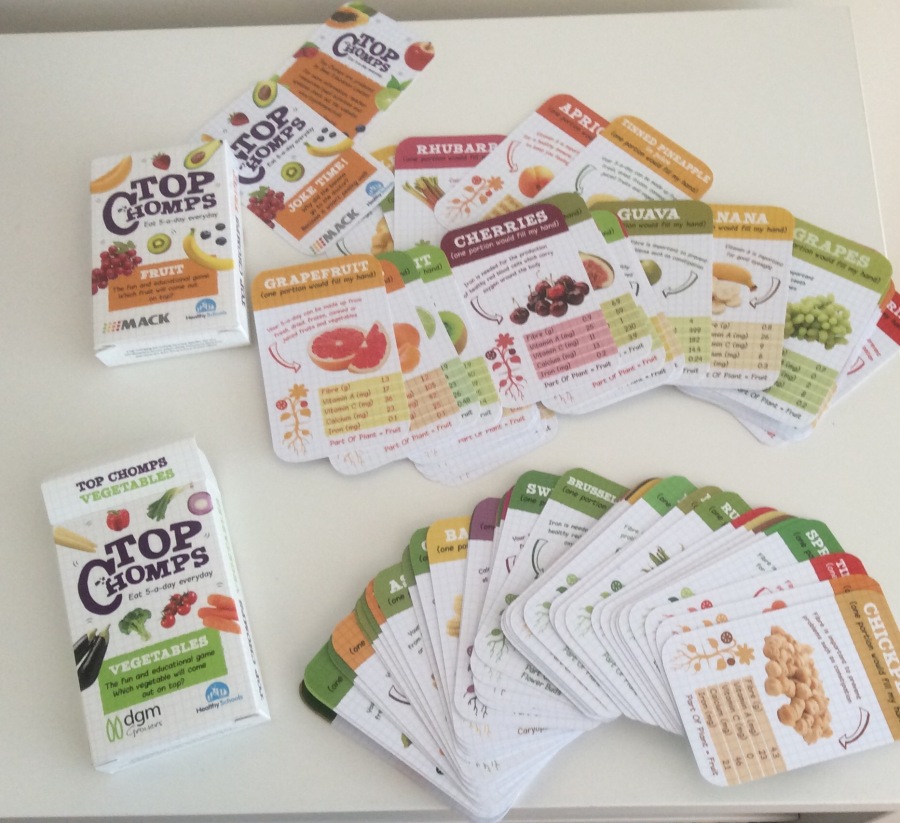 Recently, I have been trialling the use of games to aid learning in my lessons. Why? Mainly, because I think that learning should be enjoyable and fun. I would consider myself very much an active learner so the thought of sitting still for 50 minutes listening and note taking would send me into an anxiety laden unproductive state of brain freeze where I would completely switch off.

Granted, I am also well aware from my years of teaching that not all pupils respond equally to active learning styles so therefore I like to mix up the resources I use in my lessons too. So the latest game I have trialled in my lessons is Top Chomps.

I trialled it with year 7 and year 11 pupils. I like the fact that each card gives information about key nutritional benefits of the named fruit or vegetable, makes reference to the function of the main nutrient present and makes reference to portion size and which part of the plant it comes from.

Find out more about the game, it aims and some teaching resources here:

So on introducing the game, Year 7 pupils basically jumped up and down with excitement and eagerly divided themselves in teams and played the game as a starter activity to a lesson on five a day. It certainly got them excited about the topic and many were able to mention some key points of information they had learned while playing with cards.Many of them were also interested in telling the jokes printed on the front which resulted in the pupils laughing and sharing cards too. Lesson objective of learning is fun was therefore achieved.

In contrast, Year 11’s who are currently preparing for their GCSE exams were a little more serious in using the cards.We used them to prepare for the upcoming question 1 topic which is on high protein main meals from a variety of cultures. They were set a task using the pack of vegetable cards to find information about the following vegetables

Vegetables often used in cultural main meals such as:

Some of the groups decided to play the game as instructed and then when they came across the named cards,they would make notes relevant to the exam preparation task. One group in particular did this quite effectively as their game master was clearly a confident trump card player and explained the game well. Many commented on how surprised they were at the nutritional content of some of the vegetables and liked how they were picking up snippets of useful information along the way.

Another, group focused on picking out the 7 relevant cards to the lesson topic and shared and discussed the information on the cards and made notes that they would use for revision purposes.
On questioning at the end of the activity, many pupils agreed that the quality of the graphics on the cards were excellent and the information provided useful but that they would prefer to focus on the 7 cards relevant to the topic than focus on playing the game. In playing the game many said that they were focused on winning rather than learning so felt it would be better to use them in a more focused way during revision activities.

So in conclusion the cards are well designed, colourful and informative and I feel that they are an effective teaching resource.I intend to use them in the above mentioned lessons but in many more lessons across a range of year groups.
Some other ideas on how to use these cards include:

They could be used as an exciting starter or information finding activity during a lesson on the topic of Healthy Eating and Five a day particularly with none – exam classes.

They would also be great to use as research cards if pupils were doing a project or a recipe where they had to include a selection of fruits or vegetables.

They could also be used effectively in a practical technical challenge competition where pupils could pick a card out of the pack and then they would have to cook a dish with the fruit or vegetable on that card as a main ingredient in that dish.

So a little pack of cards with lots of ‘learning is fun’ potential.

I am passionate about teaching about food, nutrition and health in a practical way. View all posts by foodandhealthteacher

Feel free to comment or email me at foodandhealthteacher@hotmail.com if you would like to discuss this blog further. Cancel reply